Pavlova with banana cream and strawberries I have the pleasure to share my kitchen with Nigella, not the real one unfortunatly, but I've named my kitchenaid standmixer after her. It's gorgeous and very helpfull in the kitchen, so it made all the sense to me, to give her a little tribute. Even though the pavlova is a traditional dessert, i always relate to her version of it.

I wanted to try out this recipe for a while, and the tradition here is that whoever has it's birthday, can choose it's birthday cake. So when my brother-in-law told me he wants something with meringue, i thought it was the perfect opportunity! Strawberries start to be in season, and i asked the birthday boy which fruits he also likes, banana it is.

So instead of the whipped cream topping with fruits, i've decided to make a banana cream and top it with just the strawberries. I'm sure Nigella Lawson wouldn't agree with my organised placing of the fruits, but i'm willing to take the risk of her coming around and kick my ass about it ;) The meringue base (adapted from Nigella's prodigious Pavlova)
6 eggs white (i took 7 because mine where small)
a pinch of salt
300gr caster sugar
2 teaspoon of cornflour
1 teaspoon of vinegar, i used raspberries wine vinegar
a few drops of vanilla extract

Preheat the oven at 180°C
Put your eggs white in the bowl of a mixer with a pinch of salt (or a dash of lemon juice), start on a low speed, you need to add air to your egg white. Increase the speed slowly until your meringue is stiff, then add slowly the sugar, a little bit at a time while whisking.

Add the cornflour, the vinegar and the vanilla to the meringue and mix it in gently with a spatula. Put a few drops of meringue under the backing sheet so it doesn't move.
I've traced a circle of 24cm with a cake tin so that it's easier to make it into something round. Pour the meringue in the middle, try to make a circle and even the top and edges without working it too much. It needs to be high and generous.

Put it into the oven and lower it directly to 120°C. It should take 1 hour to 1 hour and 15 minutes, personnaly i've left mine a bit longer, but you have to know your oven.
When it looks crisp on the outisde but it's still soft to the touch, it should be ready. Turn the oven off, open the door, and let your meringue cool there.

Cut the bananas in slice, and put them into a mixer. Add the juice of half a lemon, the sugar and mix everything well together until it's smooth. Reserve.

Whip the (very cold) cream until it's almost stiff and add the sugar and vanilla extract, beat until it's holding peaks.

Add the mixed banana to the whipped cream, mix very gently with a spatula until it's combined well and put into the fridge until you'll assemble your pavlova.

500-600gr of strawberries (i chose gariguette, but any local production will do)

Invert your meringue onto the service plate and peel the backing sheet slowly off. Put the banana cream on top and try to spread it evenly.

Wash the strawberries BEFORE cutting off the top, otherwise they will get watery. Place them on the banana cream in the fashion that seems you the most suited.

It's ready! It should serve 10 persons, and believe me, it did! 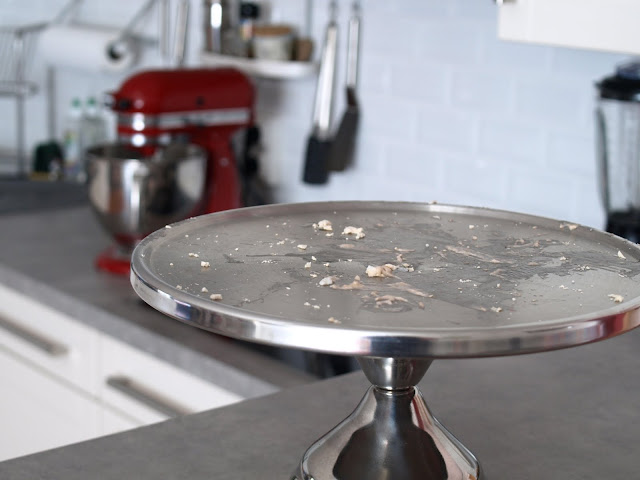 This is a few minutes after been served, i didn't even have the chance to take a picture of a slice, which is a good sign i guess. It's a fantastic dessert, the meringue is airy and soft, it's based on simple ingredients and is very tasty.
It's been a must, i'll definetly have to do it again!
Publié par marilyne à 12:46